Dubai never ceases to amaze and captivate us at all times. Today we want to dedicate our blog to this new invention that now watches the streets.

RoboCop is real at least, in the Middle East.

Dubai Police are deploying a robot policeman, and the life-sized patrolman is straight out of the uncanny valley.

According to a report from Reuters, Robocop "can help identify wanted criminals and collect evidence" and "will patrol busy areas in the city, as part of a government program aimed at replacing some human crime-fighters with machines." Because why leave to meat-based chance what you can compute with a scary-faced pile of gears and plastic?

The Dubai police force is hoping to replace a quarter of its human cops with droid cops by 2030. Should visions of a trigger-happy robot cop be terrorizing your imagination, rest assured this is more of a policeman-shaped help vestibule on wheels than a killer robot with a badge.

The world's first operational police robot stands to attention near the Burj Khalifa in downtown. The uniformed bot cop may be able to read human faces and identify possible miscreants, but it disturbingly lacks a mouth, and its face is a white spread of emptiness embedded with two darkly sunken eyes.

Talk about a chilling effect on crime.

Citizens who wish to report a crime can do so with the bot-on-the-beat, as the machine has a touch screen where its heart should be. 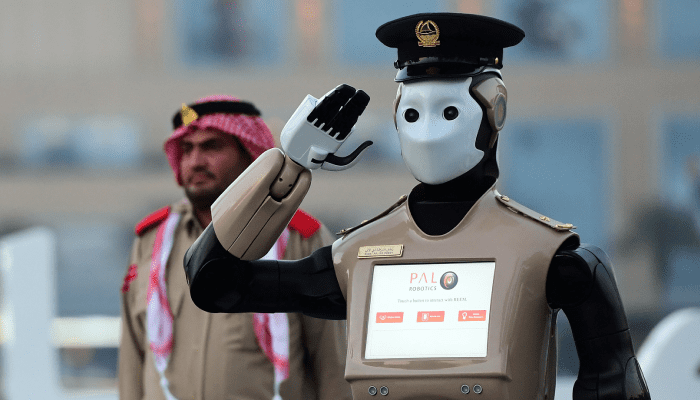 A member of the Dubai Police told Reuters there are distinct conveniences to having non-humans on patrol:

"These kind of robots can work 24/7. They won't ask you for leave, sick leave or maternity leave. It can work around the clock." Robocop was designed by PAL Robotics, which describes its mission as "Leading humanoid robotics research for the real world."

After bringing in Lamborghinis and Ferraris to patrol roads, Dubai police have enrolled a robotic. On YouTube, the Khaleej Times posted an "exclusive chat" with the robot crime fighter.

Despite the fact that the droid looks like Jason Voorhees, by simply pressing its SOS button, it will be happy to connect you to real human cops.

In the video, the android officer salutes and announces, "Welcome, Sir." Then a Dubai officer scrolls through the options on the robot's touch screen..

Buttons one can click include: "Dead Body Entry Permit," "Request to Open a Criminal," "Human Trafficking Crimes," "Detainee Visit Request," and "To Whom It May Concern." Later, a woman's voice asks, "How are you?" Blank faced, it responds, "I am fine. Thank you." The Government of Dubai is optimistic about the potential of future models taking a more hands-on approach, announcing: "The country's first Robocop, versions of which will eventually be used to chase down suspects and nab parking fee dodgers, joined Dubai Police on Sunday."

And there are more Robocops to come, the government says:

"There are plans over the next two years for the world’s largest robot, which can run at 80kph. The 3-metre tall robot will carry heavy equipment and will be manoeuvred by a police officer seated in a cabin inside.
An egg-shaped robot will be used in parking areas to issue warning about traffic violations, and self-driving motorcycles could also be sent out."

Would you like to invest in Dubai and get to know it for free?

With DisRup you can have a tailor-made investment plan and if you decide to invest with us, we will take you for free to this wonderful city.