Many of us, when thinking about Dubai, tend to prioritize a desert landscape; however, the Emiratis are working hard with impressive scientific advances to make it rain more often.

Today I want to tell you a little more about this topic, it may seem like fiction, but it is a reality that has been in this country for years.

The United Arab Emirates, aware of its desert reality and its limited water resources, began decades ago to work on it with cloud seeding. Its position on the map over a desert in the Arabian Peninsula makes the hot and dry climate predominate, exceeding 48ºC in the dry season in areas near the coast. The rains are little seen, normally some downpours fall between December and March, but these precipitations do not last too long.

Since the 1990s, the Emirati government has been investigating and working on what is known as “cloud seeding,” a practice that now seems to be bearing its sweetest fruits in the form of rains.

These rains could be the result of almost 30 years of work and scientific research to increase and improve the amount of precipitation in the country by between 10 and 30%, according to members of the National Center for Meteorology (CNM).

The UAE cloud seeding, along with the launch of the ‘Rain Improvement Science Research Program, could have a lot to do with this increase and advancement of the rainy season. The program aims to continue "developing a unified model that integrates studies of microphysics, cloud chemistry and electrical properties of the cloud." This model is expected to be operational by the end of 2020.

The idea that the United Arab Emirates started to plant clouds to guarantee water could be of global help in the not so distant future. 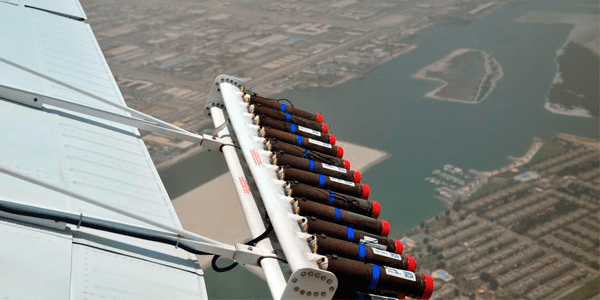 How are clouds sown in the United Arab Emirates?

The process is done using small planes, or unmanned drones. With them, substances, generally salt crystals, are dispersed in the atmosphere to catalyze the formation of water droplets and their subsequent precipitation. Substances such as dry ice or frozen carbon dioxide can also be used. By launching these materials, it is intended that they promote condensation activity, the process that causes matter to pass from a gaseous to a liquid state. When the condensation of the water vapor occurs, the formation of the cloud takes place and its subsequent precipitation in the form of snow, hail, or rain.

What benefits does cloud seeding offer?

Cloud seeding, in addition to guaranteeing water security for the population and increasing water reserves as the United Arab Emirates seeks, can also be useful to improve the air quality of large cities and decrease their levels of pollution. This second option is the one pursued by Governments like China, where some of its cities like Beijing suffer from high air pollution.

The arrival of spring in the United Arab Emirates coincides with the slowdown of the little rainfall that occurs in the country, but as mentioned, they are increasing. It is complex to differentiate what percentages of the rains are due to the cloud seeding and which to the own random of the climate. According to the results of international studies in this regard, cloud seeding could be behind between 15 and 30% of the amount of rainfall.

In the UAE the word "impossible" is almost unknown. The country has built its wealth on a desert where it is possible to ski, thanks to the world's largest indoor piste, to living on the 101st floor in one of the tallest buildings in the world, among other eccentricities. Luxury, technology, and also greater control over the climate, all this makes the United Arab Emirates a unique country.

Dubai is one of the destinations with the most technological growth and it will be like that for a long time, technology and luxury make it very attractive, and you can be part of it. If you want to know how you can invest in this paradisiacal and technological place, book an appointment with one of our advisers.