Let us delve a little into what the United Arab Emirates is, how it is governed, what opportunities it offers and how it projects itself to the world.

A glance at its impressive buildings is enough to understand the strength of the Muslim monarchies established in the Persian Gulf. These buildings express their confidence in a future of preeminence in all levels of the modern world, such as financial centers, hubs of international trade and tourist attractions.

In Central America, the exploration of the potential of the UAE is just beginning, for this reason, it is interesting to consider this destination as an attractive point to diversify investments and consolidate new growing markets.

We must see this country as a great platform and as a great opportunity. It should also be mentioned that the UAE has already opened its doors to Central America, dedicating financial funds to support certain countries in social, academic and cultural activities.

The entry of the United Arab Emirates into the world's major trade flows is relatively recent, and the immense investments from its oil revenues are only part of the story. The long-term vision, translated into courageous decisions, is due to the ruling emirs who plan to position the UAE as benchmarks for global development.

The seven emirates that make up this group are Abu Dhabi, Dubai, Ajman, Fujairah, Ras al-Khaimah, Sharjah and Umm al-Qaywayn. 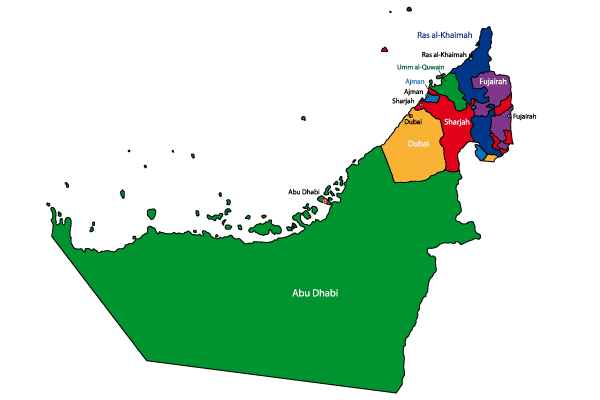 Each of the UAE members has its own characteristics. The emirate of Abu Dhabi, the capital of the group, which occupies 86% of the territory, with its immense reserves and oil productions, contributes 60% of the GDP predominates. Dubai, for its part, is distinguished by its tourist activity and hundreds of hotels with an offer of 94 thousand rooms; contributes 26% of UAE revenue. Sharjah stands out for its cultural and administrative activity, and for its airport.

The UAE is one of the five countries with the highest per capita income in the world. Today it is a myth to think that the UAE still maintains an excessive dependence on oil, the emirs opted for a government strategy focused on diversifying the economy and intensifying education programs. 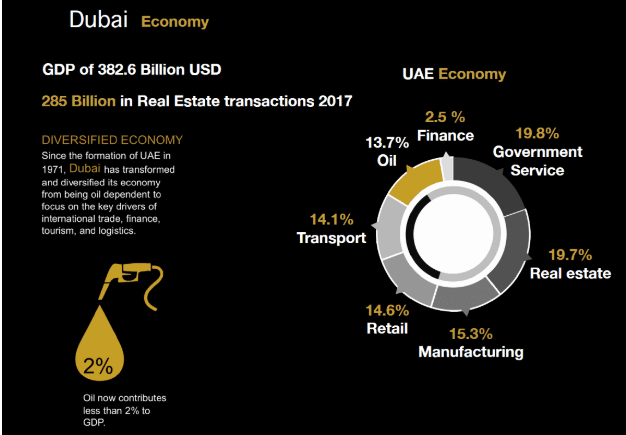 The main non-oil industries are concentrated in Abu Dhabi, Dubai, and Sharjah.

In December 1950, the first oil well was drilled in Abu Dhabi, thereby causing a drastic change in the socioeconomic and cultural features of all the Emirates, which went from a pastoral and pearl diving stage to their outstanding economic position.

In Abu Dhabi are the most important mantles: 10% of the world's oil reserves and 5% of the gas. Its new and almost incalculable wealth led to a disproportionate accumulation of capital compared to the very small population.

Emirati leaders have chosen to depend less on oil economically by diversifying into tourism activities and investing in infrastructure, education, and culture.

Consistent with the above, the UAE has prescribed a vigorous policy of attracting foreign investors, by promoting free zones, complemented by the traditional absence of an income tax, granting residency cards to investors; unimpeded access to the country's credit system, tourist attractions, a growing economy, order, and political security, among others.

Emiratis prefer to shop in hypermarkets and supermarkets for the variety of items found there. Small purchases are made in sundries or mini-markets.

The most convenient way to introduce foreign products to the UAE domestic market is through local importing agents or distributors. These must belong entirely to an Emirati or be a limited liability company with 51% Emirati.

Imports consist mainly of machinery, chemicals, and food from India, China, and the United States.

In 2014; For example, the UAE's trade with more than 60 countries produced a surplus of 24 percent.

The Koran, like the Torah, prohibits charging interest (riba) on loans. In Muslim countries, in order to respect Sharia rules, financial operations are carried out using credit instruments known in Europe since the 13th century, such as letters of credit, letters, checks, trusts, and others.

Riba is a term that means ‘addition’ or ‘excess’ and corresponds to ‘interest’. A distinction must be made between “illegitimate” usury, for consumption purposes, and “legitimate” interest, destined for commercial investment.

Products for the Emirates

Given the extreme scarcity of agricultural or grassland areas for livestock in the UAE, fresh and processed agricultural products are of particular interest. In this area, there is a great demand not only from the high-income native population but also from the hundreds of thousands of foreign workers and employees. According to Come, the Emirates imports 40% for local consumption and 60% to re-export to the countries of the region.

Grains, fruits, nuts, vegetables, fresh, dried, chilled or frozen vegetables, and meat products are attractive, with the exception of pork.

Packaged or processed food products are suitable for distribution systems. In Central America, there is a lot of experience of exporting to the United States, including Europe and Asia.

The growing need for food products in the region is inevitable for demographic reasons. Central American producers, present in an increasing number of countries, can respond to Arab demand using modern logistics systems.

The UAE offers recruitment opportunities for architects and civil and petroleum engineers; specialists in logistics, medical and health services, and designers. In hotel and restaurant management, sectors of strong growth in the Emirates, the experience and capacity of Central Americans are already recognized on the other side of the world.

There are several industrial parks in operation: four in Dubai, two in Abu Dhabi and one in Sharjah. Designed to attract commercial, industrial and service investments, products are distributed from there to the domestic market and worldwide. Thanks to them, foreign producers do not have to limit themselves to simple trade. The free zones of the Emirates can be used for the assembly and packaging of articles that come from abroad, and for this, it is enough to sign contracts with local partners that provide the equity participation that the law provides.

The topic is broad, we can continue commenting in our next blog post. Thanks for reading.

Remember that with DisRup you can get a completely customized Dubai real estate investment plan at no set-up cost.

At DisRup-Dubai we would love to show you the best alternatives to diversify your investments.